Seth Ward, Ph.D., professor of Religious Studies at the University of Wyoming (and one of the founding members of the Colorado Hebrew Chorale) facilitated a virtual summer movie club in June and July 2020.

The series is over, but you can view the discussions by clicking the links below!

Each week, participants viewed the selected film on-their-own. Most of the films were available on Netflix of Kanopy or for free (with ads) or a nominal charge from a a service such as Amazon or Vudu. Each week’s film is given with where it could be viewed (Netflix, etc.) or how to find where it was available streaming. If no streaming service is mentioned, it was available on Netflix.  If you missed the series, view the films, then follow the discussions via the links below! 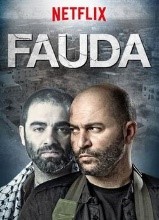 Binge-watch the whole series. We’ll concentrate though on Season 3, episodes 1, 2 and 3. 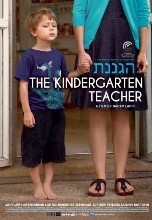 This is available on Kanopy (Free from many public and university Libraries). It’s also on Vudu (click here ) free with ads, for a nominal fee without ads.
This film was a hit in Israel and explores themes of cultural conflict, poetry, family, boundaries, ethnic tensions / Ashkenazim vs. Sephardim, and more. There was a US remake with Maggie Gyllenhaal worth comparing (it’s on Netflix). We’ll discuss the Israeli film–but consider watching the remake too, for example to contrast what is acceptable or meaningful to Israeli and American audiences. (Note: nudity and sexual scenes).

Classic Israeli film about Sephardic displacement from the Kazablan era, directed by Moshé Mizrahi and produced by Globus-Golan. Starring Gila Almagor and Shaike Ophir, and Mizrahi’s wife, Michal Bat Adam.  Dov Selzer (perhaps best known to American audiences for composing the songs in Kazablan) did the music, but perhaps most notable are performances of multiple songs by Shoshana Damari and Yaffa Yarkoni in the soundtrack.

Moshé Mizrahi was himself born in Alexandria, Egypt, as were some of the leading characters in this film, which is sometimes described as semi-autobiographical. It’s set in Tel Aviv in the late days of the British Mandate and explores social pressures on widows and on young people coming of age, the trials of Sephardi immigrant life and of Sephardi-Ashkenazi relations. It was a time of violence, and the film includes references to the Irgun, a militia led by Menachem Begin, and Arab violence against Jews.

The House on Chelouche Street is in Hebrew, Egyptian Arabic and Ladino. 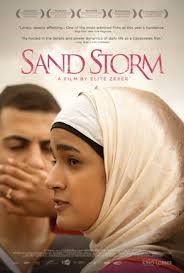 This film covers the year leading up to the Rabin Assassination, from point of view of the assassin. How does a young man traverse the path from strong views to extremist violence? The film explores the transformation of Yigal Amir over a period of months. The film examines religious, political and social issues that transformed a law student into an assassin, whose bullet changed Israel, and arguably the situation in the Middle East, forever.

It’s hard to believe that it will be 25 years since Rabin’s assassination this coming November.

Incitement is available on Amazon Video as well as other places. You may find JustWatch helpful to locate where it may be streamed: https://www.justwatch.com/us/search?q=incitement 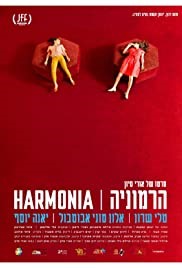 HARMONIA (2016) restates the Arab/Jewish conflict in terms of a modern reworking of the Biblical story of Abraham, Sara, Hagar, Isaac and Ishmael. One of the online reviewers for this film observed that “It’s easy to name modern characters Abraham and Sara to match the Bible story, but what’s a good match for God? The writer uses music.” (Does this mean the film succeeds or fails on the quality of the music?) Abraham is the conductor, Sara the harpist, and Hagar plays trumpet. Does a Biblical adaptation make sense? Does it resonate in today’s world–for that matter in the situation as it exists only a few years after the film was released? 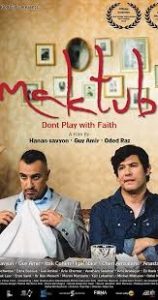 MAKTUB’s a hit comedy from 2017. The Arabic maktub means “written,” but the term is used for “fate.” Two low-life, bumbling enforcers for a gangster mob reevaluate their lives and do good deeds as they mix comedy, gangster, buddy and other movie genres. The film stars Guy Amir and Hanan Savyon, a comedy duo with many Israeli TV credits who released Mechila (“Forgiveness”) in 2019, and who may have an American film in the works. Maktub’s promotion slogan is “Don’t Play with Faith.” We’re certain to discuss whether the film does just that, and whether it succeeds for American audiences as it has for Israeli audiences. 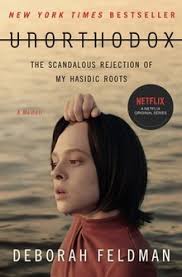 Second film in the series: Unorthodox.

The first meeting occurred on June 2, and focused on The Spy, about the life of Eli Cohen / Kamel Amin Thabet, the infamous Israeli spy in Damascus during the 1960s (available on Netflix and starring Sasha Baron Cohen). “Our Man in Damascus” was considered an invaluable asset to the Mossad and played a role in advising Israel about the early activities of the PLO, including diverting water from the Jordan River’s sources, and may have helped lay the groundwork for some of Israel’s successes in the Six Day War. According to the series (and typical Israeli reporting), Cohen played a key role in facilitating the coup d’etat that brought the Ba’th party to power in March 1963, and was in line for a key ministerial post when he was unmasked, tried and executed. Much of this six-episode series is very historical, while some of it guesswork, national myth, or outright fabrication.